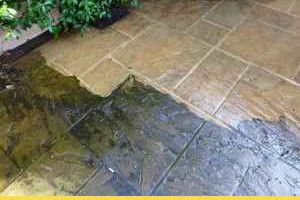 When you had your patio laid out, or steps built up to your door or to a lower level of your garden, it probably cost you a lot to make them look great. The chances are, though, after a few years they’re looking dingy, and they may even be slippery underfoot.

The good news is that it’s not time yet to pay out again to have them replaced. They just need to be washed, and Handy Squad offers a pressure wash service in London.

Over time, outdoor paving gets dirt ground into it that simple washing won’t get out, as well as weeds making their way up through the cracks. Even if you have time to spend on your knees, scrubbing won’t get rid of it all.

Dirt isn’t the worst problem, though. Concrete tends to attract growths like algae, lichens, liverworts and moss. The problem here isn’t just that growths like these make your patio, steps or paths look unattractive — they can also make them slippery underfoot.

A slippery patio or path is bad enough, but if you have slippery algae on your steps, it could cause a serious accident. You or your children could end up in hospital, or if a visitor falls because you haven’t cleaned your steps, they could sue you for damages.

Rather than working your fingers to the bone and still not getting rid of the problem, or using chemicals that could put small children or pets at risk, why not let London pressure washers Handy Squad clean your patio and steps quickly and simply?

Pressure washing, also known as jet washing, gets into every cranny in your paving, flushing out the last traces of dirt. It also shreds and blows away weeds and algae, leaving your steps, paths and patio not only gleaming like new, but also safe to walk on.

And, while you’re having your stonework done, why not also get your garden furniture pressure washed? The dirt and grime that gets into your patio and steps is probably also making the furniture look dingy, but a good wash can make it pristine again.

While small pressure washers are available to buy, they’re expensive. It can also all go horribly wrong if you don’t know what you’re doing. It’s far better to leave it to the professionals, and if you’re looking for a jet wash service in London, Handy Squad has the skills and the equipment to wash your troubles away.